With the upcoming nuptials of His Royal Highness Prince Harry of Wales and Ms. Megan Markel, I thought it high time (tea time?) to recount my stay in the town of Windsor (yes, there is a town, not just a castle, doh!) and my visit to the castle. Their wedding is scheduled to take place in St. George’s Chapel which is part of Windsor Castle.

Quiz: What is the difference between a castle and a palace? (answer at the end of this blog post)

My colleague booked me to stay at a former grand country estate turned hotel. So after a 6:30 AM arrival at Heathrow (with no sleep on the plane and jet lagged as hell) we headed for Windsor. After a couple of hours and as many beers (yes, this is what you do when waiting for your hotel room!) I checked in. Unfortunately, the place looked and smelled like a frat house! Yes, it was really that horrible.

Luckily colleague number two stepped in and found a room for me at the Sir Christopher Wren Spa, a lovely hotel on the river Thames.

Sir Christopher Wren, a famous architect in his time, was responsible for designing St. Paul’s Cathedral in London. He was knighted in 1673.

Did I mention it is located on the river Thames? Take a gander at my local guests (out the window) at breakfast each morning!

Fun Fact: The Queen owns all of the swans in the U.K. Or, technically: “any unclaimed mute swan in open waters in England and Wales is hers if she wants it”. (mute swan???) They are counted every year, at least between Sunbury Lock in West London and Abingdon in Oxfordshire, and the man in charge is the Queen’s Swan Warden (quite a gig, if you ask me!).

Did I mention that the town of Windsor is old and very picturesque?

Lots of wonderful architecture and cobbled stone streets. To get to Windsor Castle one must take the “Long Walk” on a cobbled street. On the way, we stopped at a pub and I had my first “Full English”. 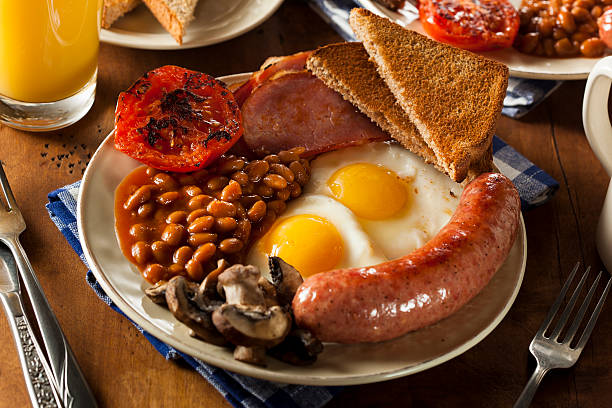 Eggs, sunny side up, sausage, bacon (the Canadian kind, not the American kind), grilled mushrooms and tomatoes, and … baked beans! Absolutely delicious! (other items on the menu included a side dish called “mushy peas” – DO NOT EAT THIS! It is terrible)

So after a Full English, we were off to Windsor Castle. It is a royal residence in the English county of Berkshire. It is notable for its long association with the English and later the British royal family and for its architecture.

The original castle was built in the 11th century after the Norman invasion of England by William the Conqueror. Since the time of Henry I, it has been used by the reigning monarch and it is the longest-occupied castle in Europe. It was Queen Victoria and Prince Albert’s main place of residence. Following Albert’s death, Queen Victoria was sometimes referred to as the ‘Widow of Windsor’. It is occupied quite often by the current Queen Elizabeth II.

Fun Fact: You can tell when the Queen is in residence because the Royal Standard will be flying over the main tower – if not, you will see the Union Jack.

Did I mention it was (and still is) heavily fortified?

Fun Fact: During World War 2 the castle was used as a home to entire royal family while the public was led to believe they remained at Buckingham Palace. It is said that during air raids Princess Elizabeth (now Queen Elizabeth II) and Princess Margaret were whisked down to the dungeon for safety. How fun!

Part of the fortifications include specially built slots in the outer walls. Called “hellholes” they allowed those inside the walls to shoot arrows at the enemy without putting themselves in danger. It is also said that burning hot tar was tossed out these wall slots – talk about a hellhole!

On to St. George’s Chapel
This is the location of the upcoming Royal Wedding.

When one thinks of a chapel it conjures up images of a holy place that is small and intimate. St. George’s is more akin to what I would call a cathedral!  Considered one of the finest examples of Gothic architecture and one of the most beautiful religious buildings in England.

St. George’s Chapel was one of the improvements made by King Edward III in 1348 and it is the Mother Church of the Order of the Garter, the highest order of chivalry (knighthood???) and the third highest honor in the U.K.

The day we were there someone was playing the famous organ. The sound made me tingle all over – just amazing. The organ was paid for by King George III and built by Samuel Green in 1789.

Fun Fact: There is a small cloistered balcony above and to the left of the altar. It was constructed for Catherine of Aragon (first wife of King Henry VIII) so she could participate in the Catholic mass without being observed.

What to drink whilst there: beer in all of its forms (the scotch is pretty good too)!

What to read before you go:

And, finally the answer to our quiz: A castle was built primarily for fortification purposes while a palace is a large and usually ornate place for entertainment and the official residence of a king, queen, bishop, or other sovereign or exalted person.

View all posts by travelingdrunkwithhistory